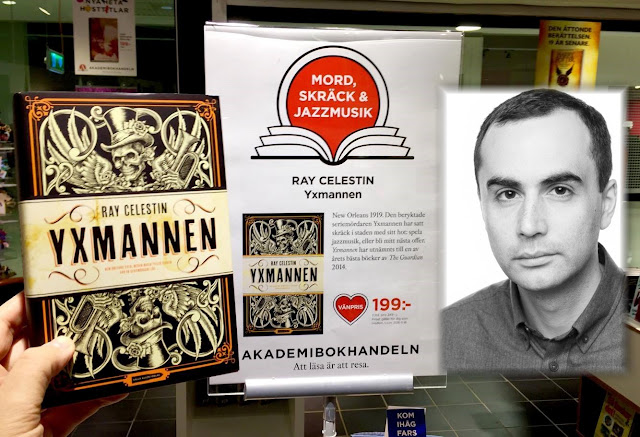 
Kalla Kulor Förlag who arranged for me to attend the launch of the book at Stockholm’s main branch of Akademibokhandeln. It was my first visit to Scandinavia, and as I walked the beautiful Stockholm streets I was reminded that one of the characters in my book also visited the city a number of times and made quite the splash while he was there. My book centres on the real-life case of a serial killer who terrorised New Orleans in the years 1918-1919. As far as I’m aware the serial killer never visited Stockholm, but one of the other characters in the book did – Louis Armstrong, who was a teenaged resident of New Orleans at the time the murders were taking place.

Armstrong first arrived in Stockholm in October 1933 as part of a European tour. One concert was planned, but such was the clamour to see him, a further three were arranged (all of which sold out). In a highly unusual move, Swedish radio cancelled its scheduled programmes to transmit part of the performance live. A recording still survives, and can be heard here on YouTube in rather bad quality. Armstrong was surprised by the level of interest he caused in northern Europe (at the time he was was still largely outside the mainstream in America, known mostly just to jazz fans). A few days before the Stockholm concerts, when he arrived in Copenhagen, the largest crowd he had ever seen was waiting to greet him: “All I remember is a whole ocean of people all breaking through the police lines and bearing down on us… They pushed a big trumpet, all made out of flowers, into my hands and put me into an open automobile and started a parade.’

(Not to be outdone by the Danes, when Armstrong returned to Stockholm in 1949, forty thousand people were at the airport to greet him.)

The 1933 tour was a commercial and critical success, even if Armstrong did receive racially prejudiced reviews in both the right-wing and mainstream press in Sweden and England (among other places). Regardless, Armstrong left something more important in his wake – he inspired a generation of European musicians to pick up instruments and play jazz, and he showed them through his virtuosity how to play jazz.

All of that, though, was a decade and a half in the future when the serial killings at the centre of Yxmannen were being played out on the streets of New Orleans. Hopefully the book (as well as exploring the still unsolved series of killings) gives readers an insight into the teenager who would go on to become the ambassador of jazz.